After months of teasing, with the track listing apparently leaking over the weekend, Gorillaz have finally announced that their fifth album Humanz will be released this year on 28th April via Parlophone Records.

It comes after the band announced a summer comeback festival, with fans hoping the virtual band can again reach the heights of 2010’s Plastic Beach. 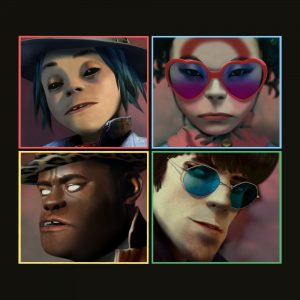 The news first broke on Wednesday evening, as BBC Radio 1 tweeted that they would: ‘premiere brand new music’ on Mistajam’s Thursday show at 7:30pm, before the official Gorillaz Facebook page announced that a further two singles would be broadcast on Radio X and Beats 1 at 7:45pm.

In all, it was a good day for fans of the virtual band, as four singles were dropped across the radio waves – ‘Saturnz Barz (feat. Popcaan)‘, ‘Andromeda (feat. D.R.A.M.)‘, ‘Ascension (feat. Vince Staples)‘ and ‘We Got The Power (feat. Jehnny Beth)‘.

The full track listing, cover art, and release date of the upcoming album were also announced as the band revealed the guest stars over Instagram. And it’s an impressive list of guest stars as well – De La Soul, Grace Jones and Kelela all find themselves featured on Gorillaz’s latest effort, whilst Rag’n’Bone Man and Ray BLK even collaborate on the same track.

According to Damon Albarn, one of the artists behind the virtual band, Humanz is ‘dark fantasy’ partially inspired by Donald Trump’s presidency – indeed, they released ‘Hallelujah Money (feat. Benjamin Clementine)‘, a politically charged single, on the eve of Trump’s inauguration. However, he also insisted that the upcoming album is ‘a party record, it’s a club record,’ so hopefully we’ll continue to see the eclectic mix of genres that defines Gorillaz.