The poster, which is the first official correspondence regarding the upcoming seventh 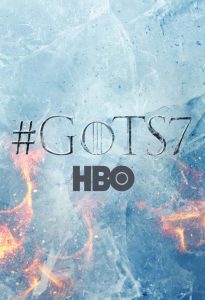 series of the show teases the upcoming battle between Fire and Ice which is set to take place between Daenerys Targaryen’s army of dragons as they come towards Westeros to clash with the Night King’s army, who are descending from Beyond the Wall.

Equally frustrating is the poster’s failure to reveal the exact release date for GOT‘s return, merely instead stating that the date is summer. Previous rumours have suggested that a July return is most possible. More information about Game of Thrones is expected during the SXSW panel, where showrunners David Benioff and Dan Weiss will be chatting to fellow Thrones stars Sophie Turner and Maisie Williams.

Game of Thrones returns for Series Seven in Summer 2017. Check out the recap of series six below: