Popular East Midlands post and rap-punk duo Sleaford Mods have today announced that they will be performing at Southampton University Student Union in November 2017.

Comprised of vocalist Jason Williamson and musician Andrew Fearn, the Nottingham pair have gained critical acclaim since 2007 for their unique, raw style and exploration of issues affecting austerity-era Britain, as well as recently starring in the documentary, Sleaford Mods: Invisible Britain in 2015, and releasing the album English Tapas this week. 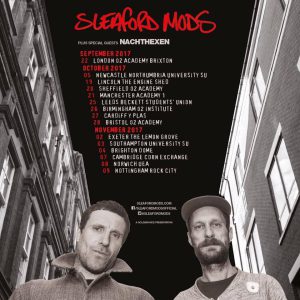 On their official Facebook page, the duo confirmed their nationwide tour, saying: ‘We’re back out on tour around the UK later this year and there’s still more dates to be announced. Ticket details soon.’ accompanied by a list of already announced dates as shown in the poster.

Alongside their Southampton date, Sleaford Mods are set to perform at a number of other University Student Unions around Britain including Norwich UAE, Newcastle Northumbria and Leeds Beckett. Ticket details for the 2nd November SUSU date will be announced soon, so keep an eye on their official Facebook and Twitter pages for more details.
Check out material from Sleaford Mods latest album below:
Share. Twitter Facebook Google+ Pinterest LinkedIn Tumblr Email