The full lineup for Common People 2017 has been confirmed today, by the event organisers.

The popular music festival, which takes place annually on the May Bank Holiday weekend on Southampton Common always boasts a variety of acts to satisfy all musical tastes, and this year is no exception.

This year, Saturday will be headlined by legendary DJ Pete Tong, who will be performing alongside The Heritage Orchestra led by master conductor Jules Buckley as they present Ibiza Classics. On Sunday, the ever-popular and self-proclaimed dancehall king Sean Paul is set to headline on the Uncontained Stage. 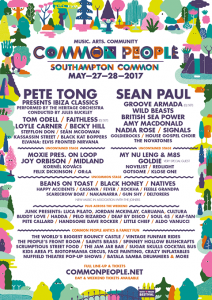 As well as the above, the weekend boasts appearances and sets from the likes of Becky Hill, a DJ set from Groove Armada and Faithless, Tom Odell, Amy MacDonald and much more. In addition, the event promises to be great fun outside the music zones with Samba drummers, a Vintage Funfair, the ever-popular Jam Jar Bar and much more.