Read more
You are at:Home»News»Global News»Mumford and Sons announced for The Felix Project charity concert
By Henna Patel on February 3, 2017 Global News, News 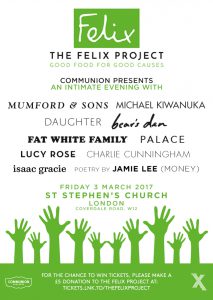 Mumford and Sons have announced that they will be performing at a one-off charity show, organised by Communion, in London along with a host of other artists.

The gig will take place at the intimate venue, St. Stephen’s Church in Shepherds Bush, London, 3rd March and will raise funds for London food-waste charity The Felix Project.

150 pairs of tickets will be available for the Communion concert. Fans will need to make an online donation of £5 (minimum), to take part in the ballot to win a pair of tickets. If successful, applicants will receive an e-ticket via email on 24th February.

Tickets for Communion’s The Felix Project charity concert are available here. Check out Mumford and Sons last live performance below: