The film based on the award-winning book War Horse by Michael Morpurgo was released in cinemas on 25th December 2011.

War Horse explores the journey of a horse named Joey from youth into adulthood, as his idyllic life in the countryside is turned upside down when he is drafted into the army and confronted by the horrors of the First World War. 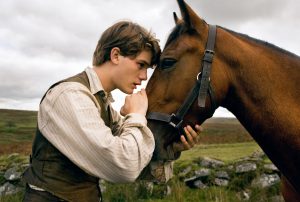 Morpurgo wrote the book in 1982, inspired after meeting several veterans of the First World War, having previously been haunted by a 1914 painting of horses charging into barbed wire fences during a battle. The film draws on the plot both of the book, and the hugely successful play by Nick Stafford, featuring the horses portrayed as life-size wicker puppets produced by the Handspring Puppet Company. It debuted in 2007 in the National Theatre to popular and critical acclaim.

Steven Spielberg took the reins of the film from there, and the full cast was announced in June 2010, featuring actors such as Jeremy Irvine, Tom Hiddleston, Benedict Cumberbatch and Emily Watson. It was rumoured at one point that Eddie Redmayne would play the main role of Albert Narracott, Joey’s original owner, but the part went to the relatively unknown Jeremy Irvine instead.

Fourteen different horses were used as Joey, and up to two hundred and eighty horses were used in one battle scene. Morpurgo had tried to adapt his book into a film for five years with limited success – to enable the plot to flow, the story could not come from the horse’s mouth as in the book, but from the narrative perspective adopted by the stage play. Spielberg was brought into the project by Kathleen Kennedy, a colleague and friend at Amblin Entertainment who had been so impressed with the play, that she was amazed nobody had made it into a film already.

In The Hollywood Reporter, Spielberg said of the story: ‘Its heart and its message provide a story that can be felt in every country.’ He also admitted to being moved to tears when he saw the play, and it is clear why. Nominated for six academy awards and grossing $177m roughly worldwide, the film has been tugging at the nation’s heartstrings for five years, and will continue to do so for many more years to come.

Watch the original trailer for War Horse below.