It’s a Wonderful Life tells the story of George Bailey (James Stewart), a frustrated businessman who has given up everything in order to help others. As he contemplates suicide on Christmas Eve, an angel, Clarence (Henry Travers), intervenes to show him what life would look like had he never been born.

Despite a tepid reaction and reception at the time, It’s a Wonderful Life 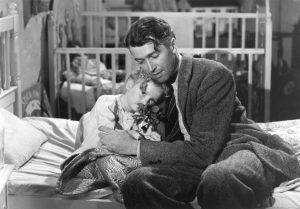 As mentioned, the heartwarming Christmas themes and message have caused it to become perhaps the most beloved Christmas film of all time, and the film is often re-screened as a Christmas TV staple, much to the surprise of the cast and crew.

Along with the overwhelmingly positive opinion on the film itself, both the hero and antagonist have become loved and despised, respectively, in equal measure. Stewart’s Bailey has become an iconic hero for the public and is seen as a hugely significant symbol of the every-man, placing at number nine on the AFI’s top heroes list, whilst his counterpart (Lionel Barrymore’s Mr Potter, the human embodiment of the capitalist and monopolistic America) placed at sixth on the AFI’s list of the best villains.

Filled with iconic scenes, characters and dialogue and often praised for its story, performances, universal appeal and heartwarming message, It’s a Wonderful Life is a film that has justifiably lived on well past its projected lifespan to become a Christmas staple and a classic of cinema.

Remind yourself of this iconic classic below: