Have you ever wondered who would win in a fight between Mario and Pikachu? Super Smash Bros. Melee may have your answer. Released 15 years ago today, the game launched alongside the legendary Nintendo GameCube console. 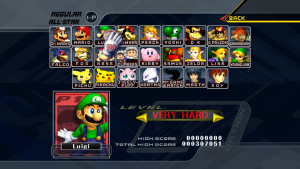 A sequel to the Nintendo 64 original, Melee builds upon the excellent groundwork laid out by Super Smash Bros 64. Bringing together classic Nintendo icons, the series represents the ultimate crossover of retro video game heroes. While its sequels would introduce iconic mascots like Sonic the Hedgehog and Pac-Man, Melee still has an excellent cast of characters from all across Nintendo’s history. While the general audience would love seeing characters like Yoshi and Jigglypuff, the game truly services its fans by including more obscure fighters like Shiek, the Ice Climbers and Ness. In total, the game features 26 completely unique playable fighters from a vast variety of game franchises.

Not only is Super Smash Bros. Melee the bestselling GameCube game ever, it’s still being played religiously up to this day, being one of the most popular fighting games playable at the Evolution Championship Series. Melee holds the title of the oldest game still featured at the tournament so something must be attracting fans to continue playing it.

However, the intense multiplayer isn’t the only thing that makes Melee such a popular game. While still built upon the fast paced fighting engine, the game’s single player offers many more unique challenges to try and conquer. You’re only really touching the surface of the game when Melee introduces crazy items, perilous arenas, and even intense boss encounters. Even trying to get all of the game’s collectable trophies is a feat that takes hundreds of hours to complete.

The only element of the game that doesn’t really hold up today is the graphics. While more powerful than the PlayStation 2, the GameCube had only just been released when Melee came out. The game’s graphics suffered, as its developers weren’t entirely sure how to get everything out of the new console. Pixelated textures and certain blocky graphics mean Melee hasn’t necessary aged well looks-wise. While the game looked fine upon release, it pales in comparison to its sequels for the Wii, Wii U and even the 3DS port.

However, that opening cinematic still manages to give me chills. Super Smash Bros. Melee is not only a fantastic game by itself, it introduced me to many of the video game heroes that I would continue to play as to this day. Watch the classic opening below: