The conclusion of the first film ended with Diesel’s Groot reborn after an act of self-sacrifice as a smaller potted tree that fans have since affectionately dubbed, ‘Baby Groot’. 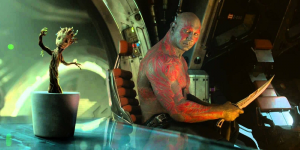 As reported in conversation with Collider, Diesel said of Groot’s development between the two films:

“Yeah, there is a difference. He couldn’t be more naive as Baby Groot. I always think of the Groot that we saw on the first Guardians as a college-level Groot, so he’s not fully grown yet, but he’s a man. And once he sacrifices himself at the end of the movie, now he has to start all over, so to speak, but we’re gonna see this goofy, adorable, baby Groot thing running around the screen and just learning as he goes.”

Diesel also revealed that, similarly to the first Guardians of the Galaxy film, he’ll also be recording his lines in multiple languages again: “I know that, on the first one, I, like, recorded six different languages, and now James Gunn wants to increase the number of languages we do this in. So, every ADR-ed line, every moment in the movie I have to do like 15, 16 times in different languages — which are cool because, you know, it means that my voice is being heard in countries where that’s not always the case, even with big movies that you do, like xXx or Fast [& Furious]. It’s usually voice actors in respective markets that say your lines and that’s not necessarily what the character is always. So, I love that, but it definitely makes it that much more challenging.”

Diesel will be reprising his role as Groot alongside the acting talents of Chris Pratt, Zoe Saldana, Bradley Cooper and Dave Bautista with the exciting addition of Kurt Russell as Ego. Director James Gunn will also be directing the sequel.

Guardians of the Galaxy Vol. 2 is set to be released 28th April 2017 in the UK, and 5th May 2017 in the US. You can relive the hilarity of the first film by watching the trailer below.