Twenty years ago today, three dimension gaming took a great step forward. with the release of Super Mario 64 for the recently released Nintendo 64, on September 26th 1996.

By 1996, the famous plumber had already been breaking bricks, and stomping Bowser on a regular basis for over 10 years. However, Super Mario 64 marked a turning point for the series, as well as a huge shift for gaming as a whole. 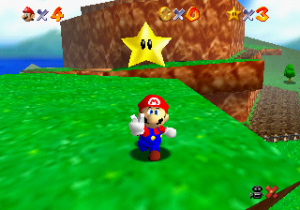 Unlike traditional side-scrolling Mario games, 64 allowed players to explore 3D environments in an attempt to collect scattered Power Stars. By today’s standards, this may not sound incredibly noteworthy, but in 1996, free movement in a three-dimensional space was simply unheard of. Other polygonal games of the era, like Sony’s Crash Bandicoot, did not come close to offering the open, not to mention explorative 3D gameplay of Super Mario 64.

The game featured an innovative control scheme which still influences how 3D games are controlled today. Surprisingly, the Nintendo 64 was the first game console to feature an analog stick. The sticks, now an industry standard, allowed for much more precise control in a 3D space. Similarly, Mario 64 marked the first time players had free control over a game’s camera. Although this innovation might now perhaps be forgotten, but would be sorely missed if removed from any 3D game.

In the sound department, Mario 64 features some of the series most well-known tunes. (The theme that plays inside Princess Peach’s Castle is one that frequently gets lodged in my brain._ The game is also first introduced players to Mario’s distinctive high pitch voice. Provided by Charles Martinet, the joyful exclamations have come define the modern happy-go-lucky character we know as Mario. 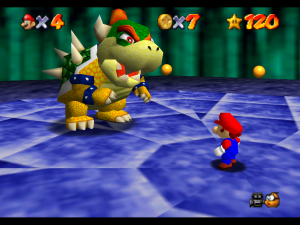 Unlike its gameplay, 64’s graphics don’t hold up as well in 2016. The blocky, polygonal designs unsurprisingly look crude by today’s standards. The game also substitutes in 2D sprites for certain environmental objects. This means that trees and certain enemies appear oddly flat against their 3D surroundings. However, these limitations must be accepted and can be easily overlooked when enjoying the game on its twentieth anniversary.

While finding a Nintendo 64 can prove difficult and expensive in 2016, Super Mario 64 has been re-released on modern consoles. The original game is available to download on both the Wii and the Wii U relatively cheaply. The version I would recommend, however, is the 2004 remake for the DS which boasts improved graphics, new levels and extra playable characters.

Super Mario 64 holds a very important place in gaming history. Nintendo has always been renowned for its ability to innovate and Mario’s first 3D outing proves this. Most modern games owe much to Mario 64, Nintendo having set the standard for 3D gaming twenty years ago today.

Watch the trailer for the classic game below: