The latest book by The Twilight Saga author, Stephenie Meyer, has been given a release date and cover by its publisher, The Little, Brown Book Group. 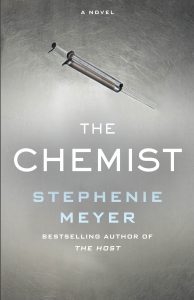 Entitled The Chemist, this book is Meyer’s first adult thriller, following the release of Sci-fi romance The Host in 2008.

The book features an ex-agent ‘of an agency so clandestine it doesn’t even have a name’ on the run after she was declared too much of a liability. She is given the opportunity of a way out by her ex handler, but predictably this leads her further down the rabbit hole, as she learns more dangerous information.

In the press release from Little, Brown Book, Meyer said: ‘The Chemist is the love child created from the union of my romantic sensibilities and my obsession with Jason Bourne/Aaron Cross. I very much enjoyed spending time with a different kind of action hero, one whose primary weapon isn’t a gun or a knife or bulging muscles, but rather her brain.’