The film tells the story of Charles Foster Kane (Welles) who, on his death-bed, mutters a singular word before passing away – “rosebud”. And thus begins a mass media scramble to determine just what this dying word means, and why the great millionaire newspaper tycoon Charles Foster Kane would utter it at the time of his death. Orson Welles (who also directed and wrote the film) stars as Charles Foster Kane whose rise to power is chronicled through flashbacks via interviews with Kane’s former acquaintances and co-workers. Kane’s story is shown starting with his early years, having been given up for adoption by his parents; all through to his demise as an ageing shell of his former self. 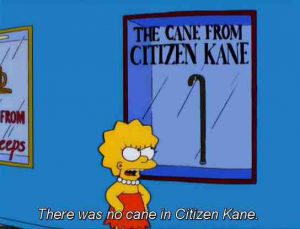 been said? Well-known for its groundbreaking and innovative use of cinematography, music and narrative structure, it is potentially the most influential film of all time – nearly every filmmaker has been influenced (both directly and indirectly) by Citizen Kane. The film has also been parodied, referenced and inspired many television shows, and elements from modern pop-culture.

The film also features a stellar performance from Orson Welles in his cinematic acting debut, having also wrote, and directed the film, all at the age of 25. But on top of all this it’s widely regarded to be the greatest film of all time; Citizen Kane has been analysed, discussed and debated seemingly to no end. It placed at number one in the Sight & Sound poll for the best films of all time for five consecutive surveys, and has placed at number one in the AFI’s 100 Years… 100 Movies list in the initial 1998 vote, and it’s 2007 update. Beloved, despised, revered, misinterpreted – everyone who’s seen it seems to develop a strong opinion on Welles’ masterpiece.

Perhaps most tragically, despite an initially positive response, the film failed to make back its budget at the box office 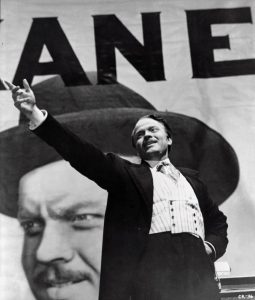 Welles as the titular Kane (image via IMDb).

after being blasted by William Randolph Hearst (the real life media mogul, thought to be the inspiration for Kane). After the Academy Awards, Citizen Kane emerged from the other side with only one trophy to its name for Best Original screenplay, despite the expectation that it would sweep the awards.

However the negative publicity attracted prevented the film from winning any other awards. Snubs came in all of the technical categories, Best Actor and Director for Welles, and Best Picture. Citizen Kane is now seen by many as possibly the biggest Best Picture snub of all time – the 14th Academy Awards are remembered more for this nowadays than for anything else. It was only after praise came from established film critics, such as Andre Bazin and Andrew Sarris in the 1950s that the film began to be truly appreciated, and experienced its resurgence which has seen it soar up film canon.

Filled with memorable moments (Kane’s trashing of his ex-wife’s bed chambers, for example), famous quotes (“It isn’t enough to tell us what a man did. You’ve got to tell us who he was”) and some truly outstanding film-making, Citizen Kane is a masterpiece of cinema and a hugely significant film for our times. Many have tried to top it and many have failed. Many will try to top it… and many will fail.

Check out this special trailer for the film, first shown back in 1940: