Read more
You are at:Home»News»Global News»Nostalgic News: ‘Toxicity’ by System of a Down was released 15 years ago today
By David Mitchell-Baker on September 4, 2016 Global News, News

Metal giants System of a Down released their sophomore album Toxicity 15 years ago today, on September 4th 2001.

Following on from their well-received self-titled album debut album three years before, Toxicity was released to critical acclaim at the time, and shot straight to the top of the US Billboard 200 album chart, whilst also opening at number 13 in the UK. Featuring hit after hit, a number of System of a Down’s most notable and popular songs come from the 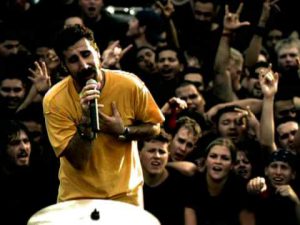 album; ‘Aerials’, ‘Prison Song’, ‘Toxicity’, ‘Psycho’, and, of course, the band’s most well known track and one of the biggest metal songs of the century ‘Chop Suey!’, can all be found among the album’s track listing.

The album has since become seminal among the nu-metal craze of the early 2000s, and has created an undeniable and equally indelible legacy among the genre. It has placed inside the top 50 metal albums of all time for publications such as MusicRadar, Spin, Revolver, Loudwire and NME, as well as achieving a number of “Best of” 2001 certifications. Most notably perhaps, it placed at 44th in Rolling Stone’s 100 best albums of the 2000s. From Serj Tankian’s unmistakable vocals, to Daron Malakian’s screams and heavy riff work, Shavo Odadjian’s tight bass work, and John Dolmayan’s fast and complex drumming, the band all bring their A-game.

Now certified triple platinum in the United States having sold 3 million copies in the US alone, the worldwide total sales of Toxicity have topped 12 million, making it one of the highest selling purely-metal albums of all time.

To this day, Toxicity remains one of the best and most popular metal albums of all time, and arguably stands as the Armenian-American band’s finest work.

Listen to the classic ‘Chop Suey!’ below: