Following the Strictly Come Dancing 2016 launch show tonight (3rd September), this year’s celebrities have been paired up with their professional partners. 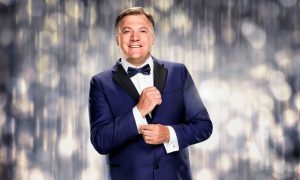 In a star-studded show which featured music performances from Olly Murs and Rebecca Ferguson (obviously a heinous betrayal on Strictly‘s main competitor, The X Factor), hosts Claudia Winkleman and Tess Daly matched each celebrity with the dance partner that will see them through the series.

As a recap, this year’s celebs include Ed Balls (y’know – Twitter phenomenon ‘Ed Balls.’), Get Me Out of Here Now‘s Laura Whitmore, EastEnders‘ Tameka Empson, and pop sensation Will Young. Here are the pairings you’ve all been waiting for:

It’s once again an impressive line up (well, they are more celebrity than Big Brother, anyway), but one of them will be out before they know it, when Strictly starts its full, live run in just a few weeks. Who will reach Blackpool? Who will reach the final? Who will take that Glitterball Trophy this Christmas?

Strictly Come Dancing airs on Saturdays on BBC One.