Turner took to his own website to announce the tour saying: “I know, I know, it’s been a long while since we were on home turf. And last time we toured the UK we only played the major cities. So, as is becoming tradition, this time we are hitting some different places, taking the show around the country to see some different people. Of course I can’t ever please everyone, but this is an attempt to cover as much ground as I can this year.” Turner has not played live in the UK since his 2015 set at Glastonbury. 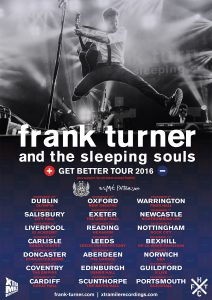 Turner also confirmed that the tour will feature support from fellow folk artists Felix Hagan and the Family, and Esme Patterson. They will support at all venues, except Dublin.

The list of all tour locations and dates is below:

Turner confirmed advanced tickets will go on pre-sale from Wednesday at 9am for fan groups, before general sale from Friday. Listen to his latest song- from which the tour title is taken from, below: