Read more
You are at:Home»News»Global News»Noughts and Crosses to be adapted by the BBC
By Rebecca Barnes on August 24, 2016 Global News, News

Malorie Blackman’s popular YA novel Noughts and Crosses is set to come to screens everywhere as BBC One announces plans to adapt the book into a television series.

Noughts and Crosses is the first book in Blackman’s series, and explores the issue of racism by flipping the traditional story on its head. 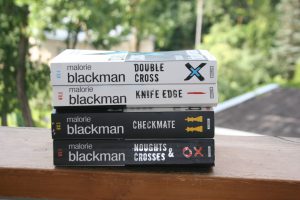 The story is set in a dystopian world where race means everything and the romance between two lovestruck teenagers is the greatest threat of all. Sephy and Callum have known each other for most of their lives but they’ve never been equal. Sephy is a ‘Cross’, a member of the elite black class and daughter to a powerful politician while Callum is a ‘Nought’, a white member of society and son to a maid. ‘Noughts’ are seen as the lower class in society and were previously slaves. While noughts are no longer slaves they are still treated as inferior, leading to extreme resentment and suspicion held by both sides. As friction between the two races increases, and the hatred shown by each side becomes more violent everything that Sephy and Callum held dear explodes.

The BBC has shown great excitement toward this new project, highlighted in the statement made by Charlotte Moore, Director of BBC Content. Moore stated: “Noughts and Crosses is the definitive book for a young adult audience and the perfect fit for BBC1. Superb, high octane compulsive storytelling set within an alternative history that explores really relevant themes about race, privilege and how we treat each other.”

Malorie Blackman also shared her excitement about the adaptation, claiming that she is: “ beyond thrilled that Noughts and Crosses will be dramatised by the BBC – it couldn’t have found a better home. Callum and Sephy seem to have meant a lot to readers over the years and I’m excited at the prospect of watching them on my TV.”

Alongside this Noughts and Crosses adaptation, the BBC have commissioned a new four part drama titled Trust me and a documentary focusing on the issue of stalking.