Read more
You are at:Home»News»Global News»You Me At Six announce UK tour
By Sophie Trenear on August 19, 2016 Global News, News

Surrey-born rock band You Me At Six have announced an extensive UK tour which kicks off this October.

The tour, announced this morning, will mark the first tour of the band’s last eighteen months, and takes in fifteen dates in fifteen cities.

“We wanted to organise a tour that would visit places we haven’t been in years and some we’ve never played before” the band said via their social media. The five-piece have been used to playing sold out shows at major arenas and venues, making the selection of intimate venues an exciting change for the group and their fans.

“Over the past 10 years there has been so many special moments, and we can’t wait to play up close and personal with you again – These will be some of the smallest shows we’ve played in the UK in forever” the band continued.

Ahead of the tickets going on sale, You Me At Six will be premiering their highly anticipated new single ‘Night People’ early next week. 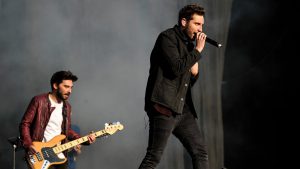 Tickets go on sale on Wednesday 24th August at 9am on their website.

See You Me At Six at the following October shows:

Listen to their music here: