The book tells the story of young Wade Watts, who spends most of his time connected into the OASIS, a virtual utopian society video game, in order to escape the dystopia which his real world has become. When its creator, James Halliday dies, he launches a contest to find a hidden Easter egg within the OASIS which will lead to one victor claiming his enormous fortune. But the OASIS is a treasure trove of endless 80s pop culture environments, characters and levels, so for Wade finding the Easter egg is easier said than done.

Since its publication, Ready Player One has received unanimous praise from critics and readers and has been a New York Times bestseller. Described by some as a combination of Willy Wonka and The Matrix, the book is a love letter 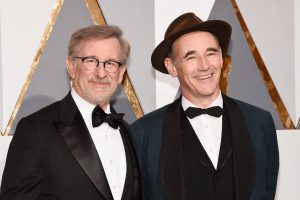 Steven Spielberg (left) is set to direct the book’s film adaptation, and Mark Rylance (right) will star as James Halliday (image via IMDb).

to 80s culture and epic sci-fi adventures of old, featuring some imagery that is almost unimaginable. The unique nature of Cline’s book has earned him a huge number of fans in the process.

The book’s success has been so tremendous that a film adaptation is currently in production. Directed by the king of 80s pop culture himself, Steven Spielberg, it will star Tye Sheridan as Wade, and features an ensemble cast featuring Olivia Cooke, Ben Mendelsohn, Mark Rylance, Simon Pegg and T.J. Miller. It is currently set for a release of March 30th 2018, with rumours circulating that Spielberg and his set designers have constructed some of the most jaw-dropping movie sets ever seen at Pinewood Studios.

With it’s already stellar reception and growing fan base, Ready Player One has become an instant classic and will likely be remembered fondly for years to come.

See Cline talk about the adaptation below: