Amidst all of the exciting Rio 2016 Olympics coverage, the newest trailer for Rogue One: A Star Wars Story finally dropped yesterday. 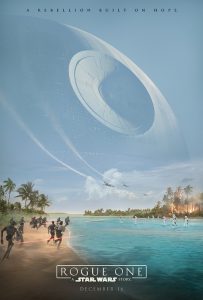 The film takes place just before 1977’s Star Wars IV: A New Hope during a time of strike between the Empire and the Republic, when the creation of the Empire’s ultimate weapon, the Death Star was imminent.

Although there is some overlap with the previous full-length trailer, the new trailer gives us a further insight into the first instalment of the Star Wars Anthology films, and is the first (albeit brief) appearance of Darth Vader. Beyond that, we see more of Jyn Erso (Felicity Jones) and the team fighting to get their hands on the plans for the Death Star, with Forest Whittaker and Alan Tudyk really coming into their own in the quick glimpses we see of their characters, Saw Gerrera and K-2SO respectively.

Rogue One: A Star Wars Story will be released in the UK and US on 16th December, 2016. You can watch the trailer below.