A new promotional picture for Gilmore Girls: A Year in the Life has created mass excitement among the show’s fans.

A new promotional photo posted on the Gilmore Girls Instagram page has left fans speculating about it’s meaning. The photo, from the Gilmore kitchen focuses on a Netflix mug full of coffee and a plate covered in Pop-Tarts, with a single apple in the middle. It was captioned: ‘Pop-Tart appetizers to hold us over ’till the pizza comes. And one apple’. 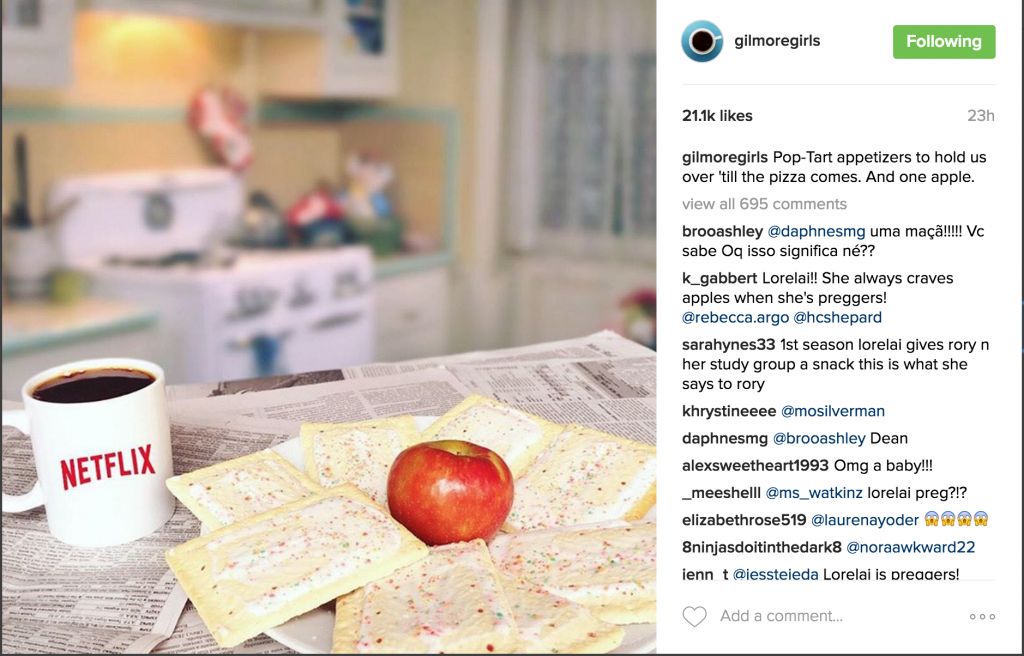 Fans of the original show are very familiar with Rory and Lorelai’s regularly unhealthy diet, with a significant part of the show having focused on what they ate. As such the apple seems a surprising choice in the image and has led many fans to speculate that one of the two leads may be pregnant. They use an episode from Gilmore Girls’ fifth season, titled Blame Booze and Melville to support this theory. In this episode Lorelai’s unusual craving for fruit led her to believe she was pregnant, as she claimed she had suffered the same cravings when she was pregnant with Rory.

Now many fans believe one of the big changes we will see in the new 90 minute episodes of Gilmore Girls: A Year in the Life will be a pregnancy, however fans have yet to agree on which character will be pregnant. Though the craving for fruit was originally a sign of Lorelai being pregnant, several fans have pointed out she will be 48 years old in the reboot and so a pregnancy would be unlikely. As such it seems more likely that Rory will be the one who is pregnant, leading to the very interesting question of paternity.

If Rory is pregnant we might finally see how Rory’s romantic story ends as in the Gilmore Girls season 8 finale, Rory chose her career over romance. The  possibility of a baby means that fans might finally learn which guy she chooses.

Gilmore Girls: A Year in the Life stars Lauren Graham, Alexis Bledel and Melissa McCarthy. The first episode will be available to stream on Netflix on 25 November 2016.

Watch the teaser trailer for Gilmore Girls: A Year in the Life below.