Butch Vig, the producer of Nirvana’s iconic album Nevermind, has spoken in praise of the band’s former drummer and current Foo Fighters front man, Dave Grohl, applauding the impact the musician had on the album’s sound. 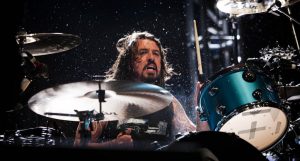 In an interview with Ultimate Guitar, Vig recalled that: “I just kept pacing around the room and going, ‘Oh, my god. This sounds fuckin’ amazing.’ Dave is an incredible musician. He really is. People always say, ‘How’d you get that sound on Nevermind?’ and 90 percent of it is Dave Grohl… it’s just how Dave plays and he’s just so, so powerful.”

According to Vig, Grohl told him that the band had practiced every day for six months before heading into the studio to record the album. He recalled: “We pretty much got every take on that record in one or two or maybe three takes” referring to their excellent record of getting everything right quickly.

Nevermind marked the first Nirvana album with Grohl on drums, after going through a succession of short-staying drummers. Grohl went on to front iconic rock band Foo Fighters after Nirvana’s split in 1994, and is known today as one of the most influential rock musicians of the past 20 years.

Listen to the classic ‘Smells Like Teen Spirit’ below: