Read more
You are at:Home»News»Global News»Nostalgic News: The Princess Diaries was released 15 years ago today
By Holly Hammond on August 3, 2016 Global News, News

“Shut up!” – The Princess Diaries, the quirky coming-of-age comedy based on the popular teen novels by Meg Cabot, was released on this day fifteen years ago today, on 3rd August 2001. 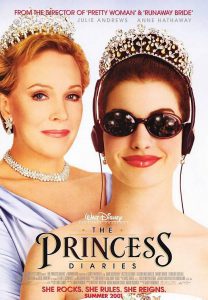 Anne Hathaway stars as Mia Thermopolis, as she discovers she’s next in line to the throne of the fictional European kingdom known as Genovia. Her life suddenly gets much more complicated as she attempts to navigate between being a Princess, and an ordinary American High-Schooler. The Princess Diaries follows her journey of self-discovery as she grows into her new role with Queen Clarisse of Genovia (Julie Andrews), her estranged grandmother, and as she faces the dilemma as to whether she wants to abdicate her right to the throne.

The Princess Diaries boasts a host of talent from Academy Award winner Julie Andrews to Mandy Moore, Sandra Oh, Hector Elizondo, and the late Garry Marshall who directed this film. We also can’t forget the wonderful Anne Hathaway in the lead role. At the time, she was a relatively unknown actress; but has since shot to stardom and appeared in dozens of blockbusters including: Interstellar, Alice in Wonderland, The Dark Knight Rises and The Devil Wears Prada. Hathaway was also awarded a Best Supporting Actress Oscar for her role as Fantine in Les Misérables.

The Princess Diaries was a surprise commercial success, taking in nearly $23 million in its opening weekend and reaching number three in the US. The film did passably come awards season, too, receiving nominations in both the Teen Choice Awards and the MTV Movie Awards, gaining a win at the Young Artist Awards for Best Family Feature Film – Comedy.

As such it’s not surprising that Disney felt one film just wasn’t enough and The Princess Diaries gained a sequel with The Princess Diaries 2: Royal Engagement being released in 2004. Rumours of a third instalment have been repeatedly flaring up for years with director Garry Marshall addressing these earlier this year when speaking to People Magazine, “I was with Anne Hathaway a couple weeks ago, it looks like we want to do Princess Diaries 3 in Manhattan.” However, given the director’s recent passing and the ever-changing nature of the rumours, we’ll just have to wait and see.

Embrace the Disney magic (and potential new sequel!) and watch the original trailer below.