Read more
You are at:Home»News»Global News»Marvel confirm X-Men has not been cancelled
By Robert Pratley on July 29, 2016 Global News, News 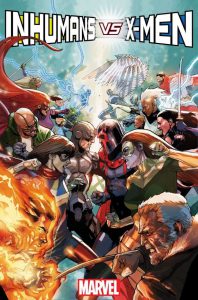 Recent speculation regarding the lack of new X-Men comics had led to rumours that Marvel Comics were planning to end the mutant series in favour of focusing on the newer and more popular Inhumans storyline.

This speculation was further solidified by the fact the only series currently featuring a major one of the mutants is called Death of X and, deals with Cyclops post-Secret Wars, possibly ending mutant-kind forever?

Unsurprisingly, these rumours turned out to be false, and at Comic Con this year Marvel announced that all current X-Men series; Uncanny X-Men, All New X-Men and Extraordinary X-Men set to all continue.

Instead, fans were treated to an announcement of new series, penned by Charles Soule, Jeff Lemire and Leinil Yu. This new series, entitled Inhumans vs. X-Men will deal with the mutant/inhuman rivalry in an all new way, which the synopsis teases will have: “the fate of their species at stake.”

Inhumans vs X-Men will be released Winter 2016. Listen to more information on the announcement below: