Read more
You are at:Home»News»Global News»Tour photography and illustrations from The Mighty Boosh set to go on exhibition
By Anneka Honeyball on July 28, 2016 Global News, News

A new London exhibition is set to showcase previously unseen photography and illustrations from The Mighty Boosh live tour.

The new exhibition, which will run for three months at The Book Club in Shoreditch, will feature unseen photography from designer, photographer and cast member Dave Brown (who played Naboo’s anthropomorphic familiar in the show) as well as tour illustrations by writer and comedian, Noel Fielding. 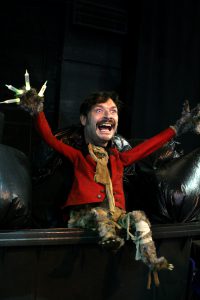 The exhibition is being held to celebrate the tenth anniversary since their first UK live tour. Starting out first as a stage show and then a six-episode radio series, The Mighty Boosh first hit our TV screens in 2004; producing three series and two live tours. Starring Julian Barratt and Noel Fielding, who also wrote and created the show, the show was renowned for it’s quirky surrealism and musical fantasy elements, as well as it’s oddball humour.

Speaking of the significance of their tenth anniversary, Brown said: “It’s been 10 years since the five of us jumped on a tour bus for the first time and ventured out of London to see if anyone else in the UK liked or had even heard of The Boosh. That 2006 tour, after the first two series had gone out on TV, was probably the first time we all realised how popular the show was. I remember the look of shock, fear and joy on Noel and Julian’s faces when those curtains went back for the first time in York, the noise and reaction was incredible and the insane crush of screaming fans at the stage door after was a sudden realisation of the size of this strange, beautiful beast they’d created.”

Meanwhile, Fielding commented: “”I can’t believe its 10 years since our first live tour! It will be great to see some ’On Tour’ photographic nuggets all together in one show. Dave’s pictures are like beautifully composed snap shots from an amazing time in my life where my feet hardly touched the floor and I felt like the luckiest girl/boy on earth. It’s also gonna be great to see some of the other art created for the show by our extended Boosh family. I’m gonna dig out some of my sketches and may even do a new watercolour to celebrate!”

The exhibition will run for FREE at The Book Club in Shoreditch from 29th October to 29th January 2017. Special events, including a including a Boosh Halloween Party and an Artist Lock-In will also be held in October.