Read more
You are at:Home»News»Global News»Notes on News: The highlights of Comic-Con 2016
By David Mitchell-Baker on July 26, 2016 Global News, News

Comic-Con has come and gone for yet another year, having left legions of fans drooling over what they’ve been treated to from their favourite properties. There’s often discussions each year as to who “won” Comic-Con; which film studio revealed the biggest piece of casting, who dropped the best trailer, who announced the most movies, or who did enough to better their competitors.

But instead of doing this, I’m going to focus on the overall highlights of Comic-Con 2016, and just why these headlines were just that little more special than the others.

Set for release in March 2019, Captain Marvel will be the first female fronted movie in the MCU and speculation has been circulating for a long time as to who Marvel would turn to for this iconic and hugely significant role.

Finally confirmed this past weekend, Brie Larson is on board for the role.

In a major coup for Marvel, they’ve landed the Academy Award winning actress, best known for her work in Short Term 12 and the movie which won her the aforementioned award, Room. Undoubtedly one of the best actresses on the planet at the moment, and now one of the biggest stars, Larson joining the MCU is a fantastic move from both sides and signals Marvel’s further ambition to recruit pedigreed actors, having already signing on the likes of Samuel L. Jackson, Chadwick Boseman and Cate Blanchett.

The biggest and best casting announcement of the event, Brie Larson is sure to deliver and phenomenal and iconic performance as the hugely powerful Captain Marvel.

A new Fantastic Beasts and Where to Find Them trailer

The highly anticipated spin-off from the Harry Potter franchise has had a tepid marketing campaign so far, with the previous trailers being solid, yet unspectacular. Obviously the anticipation is high and many people are totally on board with the film; based on the cast and crew alone which includes Eddie Redmayne, Colin Farrell, director David Yates and screenwriter JK Rowling.

However Warner Bros. wowed everyone with their newest trailer for Fantastic Beasts and Where to Find Them.

The new trailer showed us a little more of the film’s story, but much more of the amazing world that we’ve come to love over the past 16 years and the incredible visuals that go with it, which has many fans giddy with excitement. The dialogue all seems to be headed in the right direction also (“I wanna be a wizard”) and the casting all seems spot on, Farrell in particular had a real chance to shine in this trailer. Oh, and the beasts in the film all look utterly fantastic, if you’ll pardon the pun.

This was a great trailer that just makes us that much more excited for November, it really can’t come soon enough!

With an incredible cast and a talented director behind the camera, Marvel are really throwing everything they can at Thor: Ragnarök in a bid to do justice to the title. Karl Urban is on board, as is Jeff Goldblum, and Cate Blanchett. But it seems like the proverbial cheery is now on top of the cake with the apparent inclusion of elements of the Planet Hulk story line. 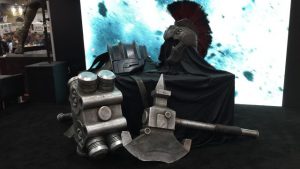 Hulk’s armor on show at Comic-Con (image via comingsoon.net).

Hulk’s gladiator armor was on show at the convention and Hall H footage seemed to show the angry one and Thor fighting in some sort of arena, leading to speculation and anticipation of the inclusion of the beloved story line, which sees Hulk sent to an alien planet where he must fight in a gladiator arena for the king’s amusement. Add in appearances from Norse mythology monsters Fenris Wolf and Surtur and Thor: Ragnarök has suddenly become that much more intriguing and exciting.

This is a brilliant move by Marvel to revive the tepid Thor movies. The inclusion of Hulk alone was exciting enough, then the huge casting announcement added to this, but now everything seems to be in place for Thor: Ragnarök to be a true superhero epic.

There’s a reason I’ve saved this one for last, as I believe it to be the best trailer of the convention and it’s quickly caused this film to jump right up my list of highly anticipated movies for 2017.

All we knew about Kong: Skull Island going into Comic-Con was that it was a King Kong origin story of sorts and that the cast would feature Tom Hiddleston, Brie Larson, Samuel L. Jackson, John Goodman and John C. Reilly. Nothing more… So I don’t think anyone saw that trailer coming.

The tone was perfect, the imagery of the huge skeletons and bloody hand print was fantastic, the casting looks spot on and the visuals look incredible. Kong: Skull Island came out of nowhere to steal Comic-Con. This was a movie that went from “Yeah I might see that, not too bothered” to “OH MY GOD I NEED TO SEE THIS”.