The finale of Marvel’s Agents of SHIELD was fraught with lots of significant changes for the characters. At San Diego Comic Con 2016, many of the show’s characters, producers and creators were there to discuss these changes.

As such, we now know more about the future of the show in terms of the darker path the agents were travelling to the increased Inhuman influence we could be seeing in the next season of the show. 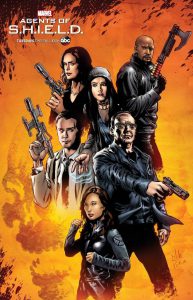 One of the most significant changes was the drastic alteration to the cast with the loss of Brett Dalton, Adrianne Palicki, Nick Blood and Luke Mitchell to the line-up. Both Elizabeth Henstridge and Chloe Bennet (Simmons and Daisy) remarked that doing the Comic Con panel was when those absences have been most keenly felt.

Characters returning to the show was another point that came up, to which Whedon and Tanchareon remarked that that option was always available. On this Whedon commented: “the foundation of the show was built on a dead man,”, so nothing is impossible.

In spite of the darker turn of events in Season 3, there was a positive response in spite of the depleted cast. Wen commented that the finale was a clean ending and gave a clear slate for the next season to start from. In addition the recent announcement that the role of Ghost Rider would be played by Gabriel Luna had everyone enthusiastic. Wen argued that his inclusion would complement the darker turn that the show had taken.

Caestecker and Henstridge were thrilled at where this season left Fitz and Simmons in their new relationship and expressed a wish for them both to have some happiness together as we move to Season 4.

Whilst none of the cast agreed to comment on who would take on the role of villain as the show moved in to Season 4, one potential candidate is John Hannah’s Radcliffe who we see create the first Life Model Decoy. It’s not quite as simple as it seems, however, with De Caestecker hinting that Fitz may also be involved.

Agents of SHIELD Season 4 premieres 20th September 2016 in the US with no confirmed UK date at the moment. You can see the latest Season 4 Comic-Con teaser below.