“Get away from her, you bitch!” James Cameron’s landmark sci-fi horror sequel, Aliens, was released in US cinemas 30 years ago today, on 18th July 1986.

Set 57 years after Ridley Scott’s 1979 original, Aliens follows Ellen Ripley (Sigourney Weaver) as she awakes from stasis, still traumatised by her encounter with the Xenomorphs on the Nostromo. Though her employers at the Weyland-Yutani corporation are skeptical of her story, they eventually convince her to join a group of machismo marines in seeking another alien threat on a terraforming colony.

Upon arrival, Ripley and the Marines meet a survivor – a scared, but resilient little girl called Newt. But when the Marines rouse the Aliens from their apparent slumber, the death toll accelerates and the recon mission quickly dissolves into an embittered quest for survival. 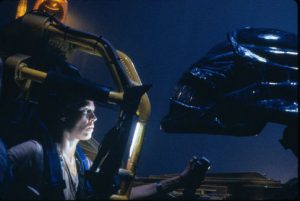 Sigourney Weaver’s portrayal of Ripley throughout the franchise is often hailed as one of the most iconic and influential female action roles in cinematic history – but, it is in this instalment that feminist film critics have found particular interest in the character. In this film, Ripley becomes a surrogate mother figure to the young Newt, whilst also maintaining a firm and powerful position among her ultra-masculine crewmates. Ripley is a bad-ass, who more than proves her worth among the Marines – but she does so without relenting ‘feminine’ qualities, such as sentiment or empathy.

Eagerly awaited by fans of the original, the film proved to be a box office hit, as well as a critical success. It’s total worldwide gross has been stated to be as high as $180 million, making the film one of the highest-grossing R-rated movies of all time.

The film was also nominated for seven Academy Awards, winning the Oscars for Best Sound Effects (Editing) and Best Visual Effects, respectively. Though she didn’t win, Sigourney Weaver’s nomination for Best Actress was also considered a ceremonial milestone, as it marked the first time that an actress was considered for a role in a sci-fi/horror film.

30 years on, and the film’s legacy is still felt throughout the film and media industries. In 2007, Entertainment Weekly named it the second-best action movie of all time (after Die Hard), and it was also named the ‘Greatest Film Sequel of All Time’ by Empire.

Remind yourself of the film’s legendary status in the trailer below.