Read more
You are at:Home»News»Global News»First images of Bill Skarsgard as Pennywise the Clown
By Robert Pratley on July 14, 2016 Global News, News

Bill Skarsgard has today revealed the adaptation of cult horror clown Pennywise for the upcoming It film.

The classic horror character, who was famously previously portrayed by 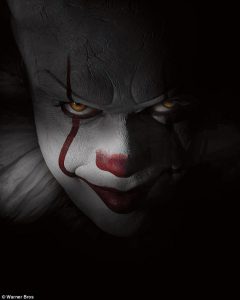 Tim Curry in the It TV series has not changed significantly in terms of look for the two upcoming films, but nonetheless remains utterly chilling in his clown get-up, with the classic menacing smirk.

When asked about the role of Pennywise in an interview with Entertainment Weekly, Skarsgard said: “It’s important that we do something fresh and original for this one. It’s purposely not going toward that weird, greasy look,” “It truly enjoys the shape of the clown Pennywise, and enjoys the game and the hunt.”

Equally, he recognised the unnatural and unnerving element to the character- whom many people would probably attribute their coulrophobia as a child from, adding: “What’s funny to this evil entity might not be funny to everyone else. But he thinks it’s funny.” And the creature even shares some traits with its victims. “There’s a childishness to the character, because he’s so closely linked to the kids,” the actor says. “The clown is the manifestation of children’s imaginations, so there’s something child-like about that.”

It is directed by Andy Muschietti, and is set to be released in late 2017. Watch the trailer of Stephen King’s original adaptation below: