…And with those immortal words, the 90’s pop phenomenon that was the Spice Girls ingrained itself firmly into the social consciousness. That’s right; everybody’s favourite Girl Power anthem ‘Wannabe’ was released 20 years ago today, on 8th July 1996. 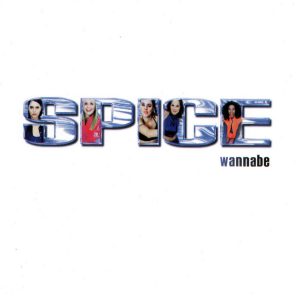 The Single Cover (via whatsthetnet.com)

‘Wannabe’ is undoubtedly one of the group’s most iconic and well-loved songs – it’s the track that established and subsequently ‘made’ them. However, it very nearly wasn’t selected as their debut single. Virgin Records were originally hesitant to release the track as the girls’ first single, with executives instead favouring the “much cooler” ‘Say You’ll Be There’. However, Geri Halliwell was ferociously insistent that ‘Wannabe’ be their debut song, as the group felt that it served the best introduction to their individual personalities/’spices’, as well as their Girl Power statement.

The track itself is widely regarded as the song most emblematic of the Girl Power message that the Spice Girls famously represented. It’s core lyrics – “if you wanna be my lover, you gotta get with my friends” – address the value of female friendship over heterosexual romantic relationships, while the enigmatic euphemism “zig-a-zig-ah” is also meant to represent female sexuality and desire.

Adding such post-feminist sentiments to the song’s eclectic, uptempo mix of dance, pop, rap and hip-hop clearly proved popular, as the double-platinum song ended up becoming the world’s best-selling single by a female group; selling over 7 million copies worldwide by the end of 1997. After topping the UK singles chart for seven weeks, the track also went on to win the award for Best British-Written Single at the Ivor Novello Awards, as well as the award for Best Single at the 1997 Brits (A.K.A: the ceremony in which Geri’s infamous Union Jack dress was unleashed upon the world).

In the 20 years since it’s release, it has remained to be one of the most iconic songs in British music history. A 2014 study by the University of Amsterdam even dubbed it “the most recognisable and catchiest pop song of the last 60 years.” More recently, the song has also been used as the inspiration for The Global Goals’ #WhatIReallyReallyWant project.

Remind yourself of those Girl Power days and sing-along to the music video below.