‘Come with me if you want to live…’

Starring Edward Furlong as John Connor, Linda Hamilton as Sarah Connor and, of course, Arnold Schwarzenegger as the titular Terminator, T2 tells the story of the returning T-800 who must now protect John and Sarah from the unstoppable, and more advanced T-1000 (Robert Patrick), all whilst preventing judgement day.

The film has provided Schwarzenegger with his most iconic role; everything from the sunglasses, down to the leather jacket, shotgun and motorbike have lived on in pop culture legend as unmistakable images of cinema’s most famous robot. As well as Schwarzenegger’s famous performance, T2 has provided the majority of its ensemble with their most well received and well recognised roles, even though it was Furlong’s debut performance. 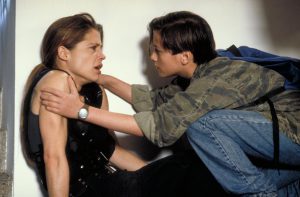 Not only is Judgement Day often regarded as one of the best action movies of the 1990s, it is frequently referred to as possibly the greatest action movie of all time. In addition, many fans and critics cite it as one of the best film sequels in history. It finished 1991 as the highest grossing film of the year, by quite some distance as well, with a cumulative gross of over $500 million, and remains to this day Schwarzenegger’s highest grossing film. Commercial love translated into critical acclaim also as the film managed to win 2 BAFTAs and 4 Academy Awards. On a technical level, T2‘s use of visual effects were acknowledged as revolutionary at the time, and still to this day remain highly influential.

The film’s action sequences stand as some of the best in film, most notably the film’s freeway chase scene, and the dialogue is highly quotable and known to many, not just ardent film bufs. Lines such as “I need your clothes, your boots and your motorcycle”, “I know now why you cry… but it’s something that I can never do” and, most famously, “Hasta la vista, baby”, have lived on in pop culture for the past quarter of a century, and will certainly do so for many more years to come.

Terminator 2: Judgement Day has created an undeniable, and indelible mark on cinema and popular culture, one that will surely only grow over time. It also provides us with arguably James Cameron’s finest film, one that will live on in memory for decades to come.