Read more
You are at:Home»News»Global News»Notes on News: Kanye made me famous – the music video scandal examined
By James Slaymaker on June 30, 2016 Global News, News

Like most of Kanye’s recent work, Kanye’s self-directed video for The Life of Pablo’s ‘Famous’ has been largely met by shock and anger, sensationalistic cries of “he’s gone too far!”, and accusations of the piece being mere provocation. 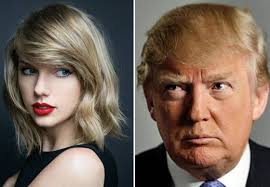 It’s true that Kanye’s ‘Famous’ is provocation, but those who use that as a basis to write it off, unexamined, overlook the fact that provocation, in smart hands, can be a tool, rather than an end-in-itself, and a powerful way to put forward a particular ideological viewpoint. When a writer refuses to engage with Kanye’s music, however, on the grounds that what Kanye does is a mere bid for attention, that’s a different matter entirely.

Kanye’s video bases its central image on Vincent Desiderio’s painting Sleep, but subverts it in several significant ways: In the painting, we know that we are watching real, anonymous people, their placement in the frame meaning that we can only base our assumptions about them on their physical body. Basically, when we look at it, we feel that we’re looking at real images of real, anonymous people. In Kanye’s ‘Famous’, we’re looking at wax figures of people who live their lives in the public eye, people whose characteristics and personalities we feel that we know well. At least, some of them are wax figures, central to the video is the fact that it’s difficult to tell who is really there and who is represented by a waxwork.

Sleep is a flat, painted image of flesh-and-blood subjects, while ‘Famous’ is a filmed video of wax figures. Desiderio’s painting is based on narrative minimalism; we could be looking at the aftermath of a large orgy, or a collection of prisoners. Some of the figures appear to be sleeping peacefully, almost in a child-like state, while others seem troubled by bad dreams, perhaps brought on by their own traumas, or guilt over something they’ve done in the past. Though Kanye’s video, to some extent, raises a similar sensation, our pre-conceived knowledge of the celebrities in it shapes our perception of the event we’re witnessing. 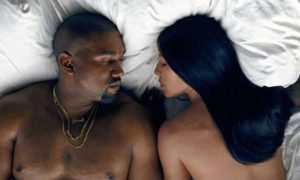 The video begins with a characteristically rich bit of Kanye synthesis: fuzzy, low-resolution VHS images of clouds, atop which sounds from several heavily publicized Kanye stunts: Declaring that “Rap is the new rock n’ roll” during an infamous BBC interview; explaining his decision to say “George Bush doesn’t care about black people”, on live TV”; and interrupting Swift’s VMA speech to make a point about the institutionalized racism of the award ceremony. As the intro to the song kicks in, we then cut to close-up, low quality images of the wax figures lying naked in bed. Significantly, the figures aren’t at all sexualized; Kanye instead emphasizes their vulnerability, stripping these modern day icons down to their bare essentials.

The image is a mixture of disarming intimacy and distance simultaneously; all the figures are lying in close physical proximity, yet they are each having their own individual experiences. It’s disturbing, and it’s supposed to be, especially when the song fades out and is replaced by creepy heavy breathing and panting, implied to be the reaction of the photographer.

The fact that the bed is filled with waxworks, roughly half of whom we can assume had no say in their likenesses being used (Taylor Swift, Donald Trump, George Bush, Anna Wintour, Amber Rose, Bill Cosby, Ray J) and the other half were probably enthusiastic about the idea, and perhaps even collaborated on the film (Rihanna, Chris Brown, Kim Kardashian West, Caitlyn Jenner, Kanye himself), complicates the ideas of consent and voyeurism implicit in the original painting. The crux of the oil portrait is that the image seems to be disarmingly intimate, leading the observer to feel that they’re prying into a private situation and hence be uncomfortable in the voyeuristic thrill they get from watching it. Kanye is making a connection between this contradiction and the contradictions of celebrity culture; as a culture, we celebrity get a thrill from prying into the private lives of those who choose to live their lives in their spotlight, excusing our worst voyeuristic tendencies by telling ourselves that this is a side effect for being in the public eye, and receiving the many material and social benefits that come along with it.

Who cares if this flavour-of-the-moth singer has embarrassing photos of them at the beach taken without their permission and circulated around the globe? They should be able to handle being taken down a peg, the common attitude goes. Of course, and here’s the contradiction Kanye gets at so effectively in his film, celebrities are becoming increasingly aware of how powerful such images can be, and hence manipulate paparazzi shoots to create the illusion that the public are gaining an intrusive window into their private life.

The recent social phenomena, Kanye most explicitly alludes to through his choice of aesthetics is that of the “staged sex tape”, which encourage the public to debate whether it’s leaked footage that constitutes a genuine invasion of privacy, or a smartly orchestrated publicity stunt that merely virtualizes their own vulnerability. This information regarding a star’s “private life”, usually a combination of the genuine and the staged, then gets co-opted by the media and transformed into a standardized, easy-to-digest narrative, a process that transforms complex and contradictory individuals into simplified types.

It’s telling that the celebrities Kanye has chosen are split more or less equally between the nationally beloved and the collectively reviled and the collectively beloved. What Kanye has done is taken the images of people who traffic in image proliferation for a living, though taken it in a far more literalist and extreme way than the everyday form of cultural ownership of bodies controlled by the mass media. There are echoes of Life of Pablo’s ‘I love Kanye’: “I invented Kanye/There weren’t any Kanyes/Now I look and look around and there’s so many Kanyes!”.

You can listen to ‘Famous’ below, with the official video set to release soon: