The Devil Wears Prada celebrates it’s 10th anniversary today, having been originally released in cinemas in 2006. 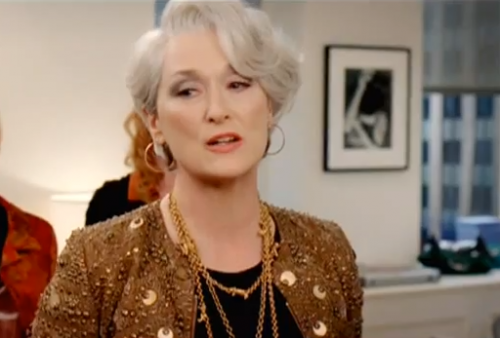 It remains a film that shaped a generation’s assumptions of the fashion industry, as well as conveying an iconic workplace dynamic, and demonstrating the fundamental importance of first impressions. Andy (Anne Hathaway) becomes a relatable protagonist to many budding journalists. Keen to delve into her journalistic career but aware of her need to gain experience, she begins her job at Runway, an influential fashion magazine run by dictator-esque editor Miranda Priestly (Meryl Streep).

While the fashion industry may have many famous names connected to it, Miranda Priestly will be forever infamous. Streep shines in her portrayal of a tyrannical and ruthless leader, with her performance gaining her an Academy Award nomination and winning her a Best Actress Golden Globe. The film itself follows Hathaway as she adapts to the high paced and high-heeled Runway lifestyle, often accompanied by both the help and witty one-liners of fellow receptionist Emily Blunt (especially the unforgettable cube of cheese diet!). Blunt’s sharp and candid portrayal is equally as brilliant.

Based on the book of the same name by Lauren Weisberger, the film gained widespread praise and a successful reception form critics and audiences alike. Office orientated television shows have certainly been embraced by audiences (The Office/The Office US/ Parks and Recreation), but The Devil Wears Prada and similar fashion centric television shows, such as Ugly Betty, prove that adding a catwalk can make all the difference.

10 years on, we still find ourselves settling on Film4 whilst flicking through channels, content with re-watching Andy ditch the polyester cardigan for a Westwood dress in a fight to gain Priestly’s approval. As the film ends and Andy realises where her true journalistic intentions lie, we find that glamour and the odd trip to Paris cannot replace passion. And if nothing else, The Devil Wears Prada emphasises the fact that florals in spring are not ground breaking, and that working at a fashion magazine means that a makeover montage is imminent.

To remind yourself of this classic, why not watch the trailer below?