Starring the late, great David Bowie and Jennifer Connelly, the film revolves around a contemptuous teenager called Sarah, whose wish for her wailing baby brother to be taken far away from her is suddenly granted when Jareth the Goblin King arrives to steal him away and convert him into another of his grotesque little minions.

Realising the perils of her mindless wish, Sarah strikes a deal with Jareth; making it her mission to solve his labyrinth in 13 hours and rescue her brother from the castle in the Goblin city. Along the way, she meets a whole host of peculiar characters including Hoggle the grumbling (but secretly kind-hearted) jewellery hoarder; Ludo the gentle giant and Sir Didymus, the valiant, but scatterbrained knight who has a dog as his steed (despite being a dog himself). 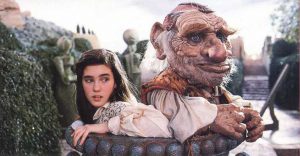 Sarah and Hoggle (Image via Google)

Following the tragic death of Bowie earlier this year, Labyrinth has taken on a whole new sense of poignancy, as fans have looked back to this film as one of his most iconic and memorable works. Although the film received mixed reactions from critics and didn’t break even at the box office (it made $12,729,917 – just over half of it’s $25 million budget), it’s easy to see why so many people have since found a place in their hearts for it.

For one thing, Bowie is undoubtedly the best element of the film; few could pull off playing such an exuberant pantomime villain, but he did so with style and flair. Jareth only appears throughout the film for about 20 minutes of the total 103-minute run time, but even so, he’s the character that makes this film. Making his entrance in a puff of glitter, with his big hair, arched eyebrows and startlingly bulging trousers, Bowie still manages to look appropriately sly and menacing. Even when surrounded with a room full of (remarkably realised) puppets, Bowie owns it.

The film also features a wonderful soundtrack, penned by Bowie himself. The ‘Magic Dance’ sequence, in which Jareth and the Goblins soothe Toby with a song, is probably the film’s most iconic scene. Other songs include the hypnotically beautiful ballroom tune ‘As The World Falls Down’ and the sax-heavy, opening gospel theme, ‘Underground’.

The film, which was written by Monty Python‘s Terry Jones and executive produced by George Lucas, also plays a part in the legacy of Jim Henson, as this was the last feature film he directed before his death in 1990.

Remind yourself of the joys of Labyrinth and the inimitable talents of David Bowie below.