Read more
You are at:Home»News»Global News»Marvel: Agents of SHIELD to introduce Ghost Rider in Series 4?
By Robert Pratley on June 25, 2016 Global News, News 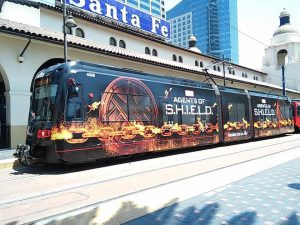 Following a teaser advert on the side of a tram ahead of the San Diego Comic Con, Agents of SHIELD fans are speculating an entrance for Johnny Blaze, better known as Ghost Rider in the fourth series of the comic action series.

In this official Twitter post, Agents of SHIELD tweeted: “Get fired up! Marvel’s #AgentsofSHIELD knows how to get to you #SDCC in style.” Along with a picture of a black tram, decorated with a black SHIELD logo and a flaming chain along the side.

Fans of the programme took into overdrive on social media speculating the fire chain was teasing the return of the undead anti-hero, who was last played by Nicolas Cage in two Ghost Rider films, most recently appearing in 2012’s Ghost Rider 2: Spirit of Vengeance.

It is currently unknown as to whether Cage would be returning to the role, but given the unsuccessful nature of Spirit of Vengeance, it seems unlikely. Although an appearance of the undead flaming-chain vigilante would tie into the darker, and violent Series 4 which has been promised by many cast members, and show producer Josh Wheddon, it is also worth noting the same chain was used by Hellfire (TJ James) during Season 3 of the show.