4 came after a hiatus from Knowles and was released three years after her critically acclaimed album I Am… Sasha Fierce, which featured the hugely popular tracks ‘Single Ladies’, ‘Halo’ and ‘If I Were A Boy’.

4, released by Parkwood Entertainment and Columbia Records featured such hits as ‘Run the World (Girls)’, ‘Love on Top’ and ‘Countdown’. ‘Run the World (Girls)’ was the lead single from the album, and became the feminist hit of the summer. The album as a whole sees Knowles divert from her traditional pop background focusing more on rhythm and blues as well as an overall lyrical message.

For the first time, Knowles used her lyrics in 4 to emphasise female empowerment, monogamy and female equality. This is reflective in Knowles’ later work such as Beyoncé and Lemonade which sees Knowles take a further stance on female equality as well as racism in the United States.

On 7th June 2011, the album was leaked onto the internet in advance, resulting in wide spread pirating which would culminate in the closure of popular piracy sites by Beyoncé and Columbia Records’ legal teams. Following the leak, the now secretive Knowles made a statement on Facebook stating: ‘”My music was leaked and while this is not how I wanted to present my new songs, I appreciate the positive response from my fans. When I record music I always think about my fans singing every note and dancing to every beat. I make music to make people happy and I appreciate that everyone has been so anxious to hear my new songs.” 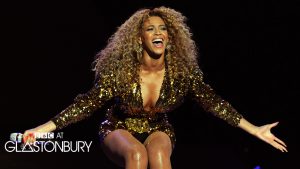 It is due to this leak, that Knowles has become increasingly more secretive with album releases. The following self-titled album was released in December 2013 without prior announcement. Similarly, the lead single from Lemonade ‘Formation’, was dropped two days before Knowles was slated to perform at the NFL Super Bowl 2016. and led to the surprise announcement of her Formation World Tour.

4 was hailed amongst critics and ‘Love on Top’ went on to win the Grammy Award for Best Traditional R&B Performance at the 55th annual ceremony. It might then come as a surprise to find out that 4 was the first Beyoncé album that failed to reach a single number one single on the Billboard Hot 100. Not one single reached the top ten, with ‘Best Thing I Never Had’ getting the closest at number 16 in the United States and number three on the UK Top 40. Following the release of 4, Knowles was announced to be the last headlining act of Glastonbury 2011, as the festival’s closing act, and was also the first solo female artist to headline the Pyramid stage in more than 20 years.

The success and popularity of 4 has lead to the album being a fan favourite, with the singles still being heard at Beyoncé concerts. The leak of the album has resulted in her lack of promotion and surprising album releases. She no longer needs to promote her albums across mediums due to her ranking as the Queen of Pop and RnB. Her music speaks for itself through the powerful messages first established in 4.