Read more
You are at:Home»News»Global News»Nostalgic News: The Smiths released The Queen Is Dead 30 years ago today
By Sean McDonnell on June 16, 2016 Global News, News

On 16th June 1986, The Smiths released their third album, The Queen is Dead, under Rough Trade Records.

Recorded and released at the height of their popularity, The Queen is Dead has been consistently regarded as the band’s greatest album. With its unique blend of various genres such as punk, pop, rockabilly and British Invasion, The Queen is Dead proves that The Smiths were, in my view, way ahead of their time. Songs such as ‘The Boy with the Thorn in his Side’, and of course, the timeless ‘There is a Light That Never Goes Out’ features Morrissey at his prime, his voice echoing the poetic lyricism so common from himself, and also Johnny Marr. 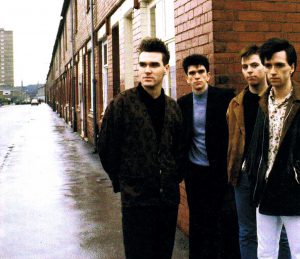 The Queen is Dead was produced by Morrissey and Marr with assistance from engineer Stephen Street.  The three utilized a very unique sound due to the combination of The Smith’s typical guitar, bass and drum sound in unison with synthesised strings and flutes, resulting in a lush sounding album. Street eventually went on to produce records for groups such as Blur, The Courteeners, The Cranberries, Kaiser Chiefs, and even Morrissey’s early solo work.

Despite this, both Morrissey and Marr disagree with the press and fans alike, citing their final album Strangeways, Here We Come as their magnum opus.

You can watch the music video for ‘There is a Light That Never Goes Out’ below: