The John Hughes classic, Ferris Bueller’s Day Off, was released 30 years ago today on 11th June 1986.

Written and directed by Hughes – the king of the teen movie in the 1980s and 90s – the film stars a young Matthew Broderick in his most well known role as the titular slacker, who is determined to skip school for a day and drag his best friend Cameron (Alan Ruck) and girlfriend Sloane (Mia Sara) along with him, despite what the principal (Jeffrey Jones) may think. 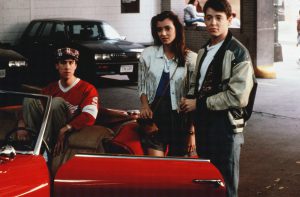 The film provided a star-making turn for Matthew Broderick, who has since gone on to star in such films as The Lion King, Godzilla and Election. The Ferris Bueller character is still hugely popular and influential to this day, thanks to his charm, wit and unforgettable fourth wall breaking. Featuring a number of iconic scenes such as Cameron and the painting, the ‘Twist and Shout’ parade scene and Ferris’ race home, the entertainment and sheer fun is infectious.

But whilst its charm and humour are unquestionable, its more heartfelt moments between the three leads have proven endearing to audiences, as Hughes touches upon the topics of growing up, moving on from high school and meeting new people – much like in his other films such as The Breakfast Club. It helps that Ruck and Sara are just as game as Broderick as the chemistry between Ferris, Cameron and Sloane is pitch perfect.

It’s also a love letter of sorts to the city of Chicago. In an interview, Hughes stated: “I really wanted to capture as much of Chicago as I could. Not just in the architecture and landscape, but the spirit.” The film features a number of Chicago landmarks including the aforementioned art gallery and the parade scene alone says all you would need to know about not only the spirit of Chicago as Hughes wanted it, but also the spirit of 80’s cinema. And who could forget the construction worker dancing along who was unaware that there was a film shooting? Hughes spotted him and decided to film him and he made the final cut.

The film itself is now seen as not only one of the best teen movies of all time (it was ranked number 1 by Empire magazine in 2005) but also one of the best comedies ever made. Ferris Bueller’s Day Off finished the year of 1986 just inside the top 10 highest earning films, bested only by the likes of Top Gun and Aliens.

The legacy of Ferris Bueller is still going strong to this day and it remains one of the best and most entertaining movies of the 1980s. Remind yourself of its charm below.