Fans now have a first look at Melissa McCarthy’s Sookie from the rebooted Gilmore Girls.

A recent photo released by Brenda Maben, a member of the wardrobe department, revealed Maben with Melissa McCarthy and Yanic Truesdale as they posed in their new costumes. 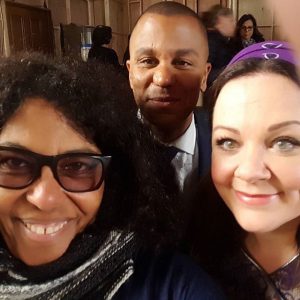 Fans will immediately recognise Sookie through the headband – an item of wardrobe synonymous with the character, exuding her innocence and vibrant personality. McCarthy previously used the show as a springboard for her career and as a result now stars in a number of other TV shows and films including the rebooted Ghostbusters and Mike and Molly.

Even after nine years, Gilmore Girls still brings joy to both old and new fans, with the show’s fan base only growing since all seven seasons were released on Netflix. With almost all of the main cast returning, as well as the return of the show’s creator, Amy Sherman-Palladino, this revival promises to give fans the ultimate experience. Not only will they be able to watch their favourite characters once again light up their screens, but will also finally see this beloved show get the send off that it deserves.

With the revival still months away, and no trailer yet released, fans will have to rely on these delightful teases from the show’s cast and crew as they patiently wait for the return of this much loved show.

You can watch a trailer for the original series below.