Read more
You are at:Home»News»Global News»Notes on News: Since when was ‘Too Female’ a criticism?
By Rehana Nurmahi on May 20, 2016 Global News, News

So at the start of this week, amongst numerous TV show cancellations, it was announced that CBS were dropping the pilot of the new Nancy Drew show. In regards to their reasoning behind the drop, despite positive responses from the screening audiences, they remarked that the show ‘skewed too female’ – which begs the question: since when was ‘too female’ a bad thing?

This has yet again just demonstrated to the world that the industry still seems to be living in the dark ages. Last time I checked, half of the world’s population was female, and that half of the world were still- in fact- part of the demographic that television producers should still be providing content for.

Apart from the fact that they outright said that the drop was due to the female-led cast, it would be pretty clear that it was anyway. The premise of the show followed the iconic female detective, now in her 30’s, working as an NYPD detective. Considering the fact that there are so many detective and police shows on air, with more being picked up each year, what about a female being at the helm would suddenly make the ridiculously successful and beloved structure unsuccessful? 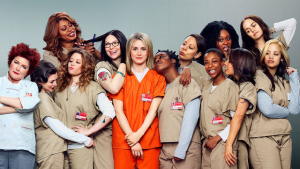 Shows like Orange Is The New Black have achieved monumental success with largely female casts. (Image via Wikia.com)

Male TV execs seem to think that is the case. Out of the nine new shows that CBS has picked up, only two of them have females in a main role. One of these is the newly commissioned spin-off to The Good Wife, and the other is Doubt. The latter, although starring Katherine Heigl as one of the lead roles, focuses on the relationship between a lawyer and her potentially guilty client- thus demonstrating that yet again, a woman is considered uninteresting unless her story revolves around a man…

This of course is utter rubbish, and you’d think that producers would be able to see that, given the sheer number of female-led series that are achieving remarkable success right now; Orphan Black, How To Get Away With Murder, Veep, Call The Midwife, Orange is the New Black… And that’s just to name a few – none of which ever consider themselves ‘less’ because of the strong female presence within them. Critics clearly see it as a strength, considering the many accolades that some of these shows have garnered. For many, it is the strong female characters that appeal to audiences. I’ve been saying for the last few years that television is clearly the place to be right now, especially when compared to film; it is a lot more progressive and inclusive. However, the cancellation of Nancy Drew is just another sign that progress is so far from being truly achieved.

I think what makes this news even more upsetting for me, is the fact that not only are we losing a show led by a female; but we are losing a show led by a female woman of colour. The eponymous role was to be played by Sarah Shahi- a Spanish-Iranian actress. As Viola Davis said in her Emmy-winning speech earlier this year, “The only thing that separates women of colour from anyone else is opportunity” – and that’s not going to change unless producers start giving these women opportunities and roles.

There has been a lot of negative backlash to this decision, with the hashtag ‘#toofemale’ trending in an attempt to draw attention to the ridiculous nature of CBS’ claims. At least the rest of society seems to realise that females are human, and interesting and should be recognised by TV executives.

Hopefully, with the continued praise that the aforementioned shows get, producers will finally realise that ‘female-skewed’ is not a negative thing, and it never will be.