The latest villain to face the God of Thunder will be played by none other than two-time Oscar winning actress, Cate Blanchett, who is set to bring the mysterious and powerful ‘Hela’ to life onscreen.

Jeff Goldblum has also joined the cast as the eccentric ‘Grandmaster’ – a cosmic being who plays chess with lesser lifeforms such as humans. Meanwhile, Karl Urban is set to play an Asgardian warrior named Skurge. 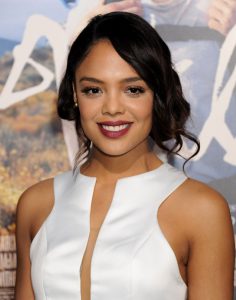 Tessa Thompson will also star in the film as Valkyrie (Image via celebmafia.com)

Perhaps most interestingly, Creed‘s Tessa Thompson has also been cast in the film as Valkyrie – a classic character who, in the comics, is portrayed as a blonde-haired, blue-eyed warrior. Following the criticism Marvel faced after casting Tilda Swinton as The Ancient One in Doctor Strange, this latest casting seems like a step in the right direction.

The studio has also officially confirmed that Mark Ruffalo will make an appearance as the Hulk/Bruce Banner, alongside returning stars, Chris Hemsworth, Tom Hiddleston, Idris Elba and Sir Anthony Hopkins.

Speaking of the new cast members, Marvel’s President, Kevin Feige, said: “The continuation of the epic Thor franchise will be powerful and unique, and with the additions of Cate, Jeff, Tessa, Karl, and Mark to the cast we have the makings of his most dangerous and heroic adventure yet. The sheer, raw talent each of these actors brings to the screen can’t be quantified. Having any one of them join the Marvel Cinematic Universe would be an honor, and having all of them is incredible.”

Directed by Taika Waititi, Thor: Ragnarok is set to arrive in UK cinemas on 27th October 2017.

Watch the trailer for the last Thor film below.