Read more
You are at:Home»News»Global News»Nostalgic News: Shrek was released 15 years ago today
By Sophie Trenear on May 18, 2016 Global News, News

Shrek, the acclaimed DreamWorks comedy, was released in the US 15 years ago today on 18th May 2001.

Featuring an all-star cast including Mike Myers, Eddie Murphy and Cameron Diaz, the iconic animated comedy follows Shrek (Myers), a green ogre who he is forced out of the solitude of his swamp and interrupted by various fairytale characters and creatures who implore him to visit Lord Farquaad (John Lithgow). Farquaad sends Shrek, along with his young ward Donkey (Murphy) to retrieve the Princess Fiona (Diaz), who is locked away in a dragon-guarded tower. Cue an overload of love-triangles, ogre-like mishaps and dragon-donkey hybrids. Because of course. 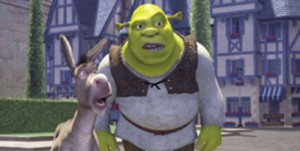 The wit at the heart of Shrek appeals to all generations. (Image via DreamWorks)

But the reason why Shrek has stood solid for the last 15 years is not so much because of it’s plot – which, although simplistic, is nevertheless a solid, confident storyline which cleverly complicates the idea of beauty and the beast – but rather because of its pure wit. Original, still to this day, the film fulfils both adult interest as well as its predominant lower-aged target audience, without isolating either groups. It remains a difficult task to think of any other film that carries out such an intention as well as Shrek does.

Even the more liberal, unique animated films of recent years like Big Hero 6 (2014) and The Lego Movie (2014) seem to favour one group over the other, however marginally. Shrek, on the other hand, appears to equally appeal to both. As we grow older, we hold the nostalgia of the sickly-sweet Dulop song close to our hearts, but we’ve learnt to treasure the other, subtler jokes too (“Do you think maybe he’s compensating for something?”)

Shrek received a decidedly positive reception upon its release from both critics and audiences alike. Based on his book, author William Steig is said to have enjoyed the film despite having hesitations about Hollywood’s influence on his work, calling it a “wonderful, witty job.” The film earned $484.4 million worldwide and was nominated for an Academy Award for Best Animated Feature (the first time this award had been included by the Academy), six BAFTA Awards including the Best Film award, and a Golden Globe Award for Best Motion Picture –Musical or Comedy. It won the former, beating Pixar’s acclaimed feature, Monsters, Inc (2001).

It comes as no surprise then, to know that the film managed to get three sequels commissioned, including Shrek 2 (2004), Shrek the Third (2007) and Shrek Forever After (2010), all of which were successful at the box office. On top of this, two holiday specials were commissioned including Shrek the Halls (2007) and Scared Shrekless (2010), and the spin-off prequel Puss in Boots (2011). A fifth film in the franchise was also planned and later cancelled in 2009. However, while the franchise may be finished, there can be no doubt that Shrek will continue to have an influence on other media and will remain iconic for a long time to come.

Dip into nostalgia for two minutes with the original trailer for Shrek below.