Read more
You are at:Home»News»Global News»Elton John confirms appearance in Kingsman: The Golden Circle
By Anneka Honeyball on May 18, 2016 Global News, News

Following a fair amount of media speculation, Elton John has now confirmed that he will indeed be making an appearance in Kingsman: The Golden Circle. 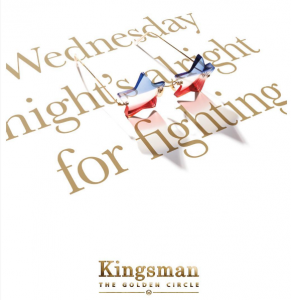 The renowned musician posted a cryptic poster on Instagram, designed in the same fashion as the film’s previous marketing images. A pair of the singer’s iconic glasses are seen resting across the quote: “Wednesday night’s alright for fighting.”

The film, which has already begun shooting, will be once again be directed and co-written by Matthew Vaughn. Taron Egerton and Mark Strong are set to return as Eggsy and Merlin, while Halle Berry, Channing Tatum and Pedro Pascal are joining the cast as members of the Statesmen – the Kingsmen’s American counterpart.

Julianne Moore is lined up to play the big villain this time around, while previous posters have also indicated that Colin Firth’s seemingly deceased character, Harry Hart, might also make a shocking return. It is as yet unclear what role John will play in the film.

Kingsman: The Golden Circle is currently slated to arrive in US cinemas on 16th June 2017. Remind yourself of the first film in the video below.