Read more
You are at:Home»News»Global News»Nostalgic News: Top Gun was released 30 years ago today
By Marcus Bridgland on May 16, 2016 Global News, News

One of the most iconic and defining films of the eighties, Top Gun, was released 30 years ago today on 16th May 1986.

Directed by Tony Scott, Top Gun was arguably the film that put Tom Cruise on the flight path to stardom, with his career taking off after his performance as the inherently talented but careless Pete “Maverick” Mitchell. 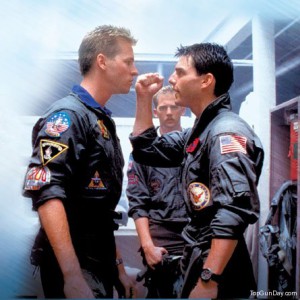 The rivalry between Maverick and Iceman is one of the film’s highlights. (Image via Google)

After disobeying orders in assisting the landing of a colleague, “Maverick” and his partner “Goose” (Anthony Edwards) are sent to the highly regarded ‘Top Gun’ school for the ‘best of the best’ pilots – despite strong reservations about Maverick’s rashness and apparent high-risk flying style. “Maverick” quickly ‘settles’ in, eventually wooing the instructor Charlie (Kelly McGilles) and forming a rivalry with top student “Iceman” (Val Kilmer), who regards him as ‘dangerous.’

Lieutenant Commander “Jester” also sees the obvious reckless nature in Maverick, but is also aware of the inherent talent that he possesses. The death of Goose, due to the infamous jet-wash, threatens to put a stop to Maverick’s adventurous ways but in a frenetic finale, he ends up saving the newly crowned Top Gun “Iceman” in a crisis situation involving hostile MiGs.

That ‘cool guy’ aura portrayed by “Maverick” (the classic image of Tom Cruise straddled on a Harley Davidson with his shades on springs to mind, obviously) along with the stunning aircraft shots make Top Gun a classic pop-film from the 80s, even if the scenes between Cruise and McGilles are mostly very flat and one dimensional.

There are power ballads aplenty, with the infamous ‘Danger Zone’ from Kenny Loggins forming the soundtrack (one of the most successful; to this date going 9x platinum) to a plethora of visually excellent aircraft dogfight scenes. No expense was spared during filming, with one particular story involving Scott writing a cheque on board the USS Enterprise for $25,000 to turn the ship around for a shot that meant just five extra minutes of filming.

Without this film we probably wouldn’t have the Tom Cruise we all know and love today, and in a world of CGI footage, it’s refreshing to see how well the real footage of the F14s and USS Enterprise aircraft carrier compares to modern cinema.