Read more
You are at:Home»News»Global News»Oasis documentary, Supersonic, to be released in October
By Sophie McEvoy on May 15, 2016 Global News, News

The team behind the critically-acclaimed and award winning documentary Amy have unveiled the title of their upcoming Oasis documentary, Supersonic.

The title comes from the band’s ground-breaking debut single released in 1994. The single appeared on their debut album Definitely Maybe – the fastest selling debut album of the time. 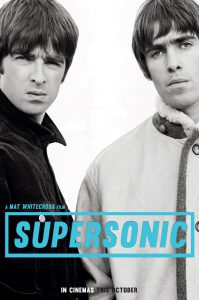 Teaser Artwork for the documentary. (Image via Way To Blue/Fear PR)

Oasis defined Britain and the world in the 1990s and early 2000s, releasing some of rock ‘n’ roll’s most defining albums. The band also sold out shows across the world; the biggest being at Knebworth Park in 1996, playing to 125,000 per night, with 2.6 million fans applying for tickets.

The band eventually broke up in 2009, with Noel and Liam Gallagher moving on to other things. Liam continued with the former members of Oasis under the name Beady Eye, until they disbanded in 2014. Meanwhile, Noel formed Noel Gallagher’s High Flying Birds in 2011, and has since gained significant popularity as a solo artist.

Not only will Supersonic document the rise of Oasis, but will also give fans a rare opportunity to view never-before-seen archive material of the band.

Supersonic will be released this October in the UK, by Lorton Distribution.