The 63rd annual Sydney Film Festival has announced some new events to entice its guests, namely the gourmet cinema event, a foodie pairing with the documentary to be screened Ants On A Shrimp: Noma in Tokyo; and ‘Beyond Cinema’ a free immersive experience available at a range of venues, looking at the inner workings of the film industry and storytelling as art in new and innovative ways.

The gourmet documentary experience comes with the option of a restaurant pairing or film only screening, with the former boasting a four course meal from one of Sydney’s highest-rated dining establishments: The Bridge Room. Guests will be able to see the film at Dendy Opera Quays, followed by a walk to The Bridge Room on either Tuesday the 14th or Wednesday 15th June, commencing from 6:30pm each evening. The restaurant was named 2016 ‘Restaurant of the Year’, has three chef’s hats and head chef Ross Lusted was awarded Chef of the Year 2014 in Sydney Morning Herald’s Good Food Guide. The 66 seater has a host of famous names to its design, and the open kitchen is housed in a 1930’s Heritage Listed building. 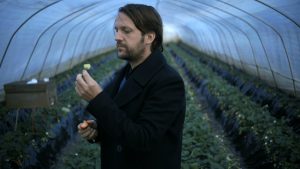 Ants On a Shrimp: Noma in Tokyo accompanies the meal with a tale that follows celebrity chef René Redzepi on his journey from 4-time best restaurant in the world to a culinary adventure through Japan, with the goal of creating 14 courses inspired by the local cuisine. Maurice Dekkers’ cinematic portrayal of the senses explores the tension and hardship that goes hand in hand with perfection – each dish the team tastes only adding to their endeavour for the ultimate opening night in their new restaurant. Sure to build an appetite for those in attendance; Dekkers’ tantalising taste-bud extravaganza is one of many exciting events for the June festival.

The program runs predominantly from the heart of the festival in Sydney’s Lower Town Hall from 9 – 19th June; and is aptly named Down the Rabbit Hole – Virtual Reality at the Hub. This is the first of the three events; where nine virtual reality films will be screened in total – utilising the new and exciting technology from Samsung Gear and Facebook’s Oculus Rift; programmed by Mathieu Ravier and presented in association with Jumpgate VR. A range of experiences will be on offer, with everything from entering Lewis Carroll’s own weird and wonderful imagination to feeling true blindness – with the intent to open people’s minds and offer possibilities never before comprehended.

A History of Cuban Dance: A stroll along the streets of Havana
Stuck in the Middle with You: Sydney Dance Company dancers invite you on stage to get involved
Warwick Gold – Australian Rodeo: Go inside the world of a cattle farmer and one of Australia’s top saddle bronco riders
Fabulous Wonder.Land: Fall down the rabbit hole and into a Lewis Carroll inspired music video
Notes On Blindness: Into Darkness: Find out what it’s like to lose your sight
Madeleine: Haunting an asylum, a true horror experience
Assent: Walk in the footsteps of army officer in Chile’s Caravan of Death
Drawing Room: Experience the first ever fully hand-drawn VR experience – a true artist’s dream
The Rose and I: Step into an animated encounter with a lonely rose

The festival is even offering those interested in the experiences a free panel discussion Diving down the VR Rabbit Hole (Saturday 11 June, 12:00pm) featuring writer Mike Jones and a selection of the VR filmmakers who have works screening at The Hub. 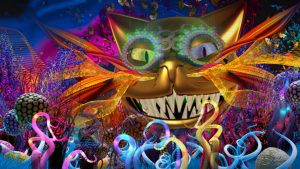 Another event falling under the Beyond Cinema umbrella are the 360-degree 3D iCinema, available to access from the 8th-18th June. Offered by the University of New South Wales, experimental films will be screened in the all-encompassing cinema experience – namely Deluge (an insight into the cyclone that hit Queensland in 2001) and Nebula (dream work moving between natural and human worlds). These are presented by Dennis Del Favero, celebrated Australian playwright Stephen Sewell and others.

The third and final event that Beyond Cinema is presenting arrives at Carriageworks from the 9th-17th July: titled Hossein Valamanesh: Char Soo. This will be a four-sided video experience, an installation designed for the viewer to be at the heart of an Iranian bazaar – full of movement, colour, and interaction. Video experiences also come in the form of the return of Sydney Contemporary: Australia in Focus – another installation that toys with imaging and cinematic techniques; an example being super slow-motion that is available for visual artists in manners their movie-making cousins cannot.

The full Sydney Film Festival program will be announced on Wednesday 11 May at 11am, alongside the Festival Hub program of talks, performances, parties and events.

Tickets to Gourmet Cinema are on sale now. Please call 1300 733 733 or visit www.sff.org.au for more information. Beyond Cinema is free to attend.