Read more
You are at:Home»News»Local News»The Edge wins big at this year’s Media Ball
By Anneka Honeyball on May 3, 2016 Local News, News

Last night, SUSU’s media departments came together for our annual Media Ball, and we are very pleased to announce that The Edge sweeped up a total of nine awards on the night! 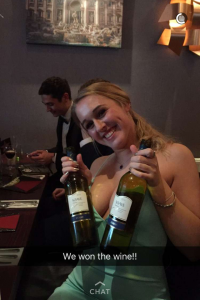 We also won the bottle of wine for most tickets sold! (Image by Helen Archer, via The Edge Snapchat)

The first University of Southampton Student Film Festival, which The Edge sponsored in association with Wessex Films, won the award for Best Event.

Our future Records Editor, Xavier Voigt-Hill, won Best Newcomer in recognition of his tremendous involvement with not only The Edge, but also Wessex Scene and Surge Radio. Meanwhile, our Online Manager, Jack Lewin, won Highly Commended.

The Edge also took home the award for Best Multi-Media initiative for our collaboration with SUSUtv on The Edge Sessions: The Hoosiers. Meanwhile, our very own news section won Highly Commended in the new category for Best Innovation, in recognition of our popular opinion feature, ‘The Edge Reacts To…’

Our Head of Relations, Georgia Simpson, was also given the award for Outstanding Contribution to The Edge, while Jack Gracie won Highly Commended.

Speaking of our monumental wins, our fearless leader and Editor, Natalie Fordham said: “It’s lovely for all of our writers and committee’s hard work to be recognised over the year. I’m so proud of everyone’s hard work and everything they’ve achieved. It was so lovely to get to celebrate alongside our fellow media departments!”

Congratulations to all the winners of last night’s Media Ball Awards and a huge well done and thank you to everyone who’s read, contributed to and supported The Edge this year!