Australia’s AC/DC has been a household name for decades. First formed in November 1973 in Sydney, Australia, the band is credited with taking the heavy metal genre to unprecedented success along with other major artists of the late 1960s and early 1970s. They have been active for 43 years and released 15 studio albums in that time: but their widespread fame began with High Voltage. 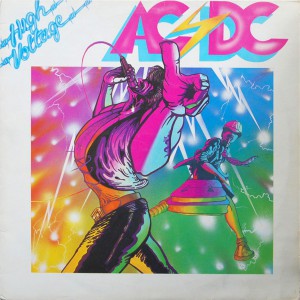 Initially rebuked by critics, the record saw huge commercial success as the band’s first international release, selling three million units in the USA alone. High Voltage slots in just under halfway through the Bon Scott Era, which ended with Scott’s death on 19th February 1980. Following the loss of Scott, the band, encouraged by the parents of the late vocalist, persisted and ushered in the Brian Johnson Era and the genesis of their most successful release to date, Back in Black, which sits as the second best-selling album of all time.

High Voltage bears the stamp of AC/DC’s early blues rock influences. They were considered to be heavy, though perhaps not as obviously as Black Sabbath or Deep Purple and certainly not as obviously as Judas Priest, who discarded much of the blues influence from heavy metal with their first two albums.

More broadly, High Voltage sits on the cusp of an impending dive into a heavier musical language, teasing the edges with sharp, distorted guitars and extended riffs in tracks like ‘It’s A Long Way To The Top’ and ‘T.N.T’. The influence of blues rock is still retained, most notably in ‘The Jack’ and ‘Little Lover’ which slow the pace of the album. This influence can also be seen in the record’s original European cover, which nods to the band’s early use of blues and psychedelic rock convention.

Another marker of the departure from traditional forms of rock was in AC/DC’s lyrical material. More aggressive than contemporary styles, the band’s lyrics enraptured young listeners of the 1970s. Lines like “Gettin’ robbed, gettin’ stoned, gettin’ beat up, broken boned,” reveal a heavy focus on machismo which attracted young, upwardly mobile men.

With the benefit of hindsight, AC/DC’s place in the spotlight seems self-evident. But, to the young members of the band in the pre-Johnson Era, the sudden explosion of critical and artistic attention that came with the release of High Voltage must have come in equal waves of shock and elation. Surely then, that is what the album stands for in the discography of one of heavy metal’s most iconic bands: an important marker in the development of modern peripheral genres; a sudden genesis that prophesised an exponential rise to greatness.