It’s hard to believe that it’s been five years since our first introduction to the fantastical world of Westeros, the colourful roster of despicable and honourable characters, the grisly violence and engrossing dialogue of the incredible show that is Game of Thrones.

Based upon George R. R. Martin’s beloved book series, A Song of Ice and Fire (side note: please hurry up with book 6, George!), Game of Thrones has become a phenomenon over the last five years, capturing the hearts and minds of millions of viewers worldwide. It has forcefully brought the fantasy genre back into the forefront – Not since The Lord of the Rings has fantasy been this cool! The show has cast a net of viewers well beyond the standard nerd crowd, attracting casual TV watchers and cool kids across the globe with it’s fascinating politics and epic scope. But never have we seen a show be so brutal with its characters – a lesson learned the hard way, no one is safe in Game of Thrones. 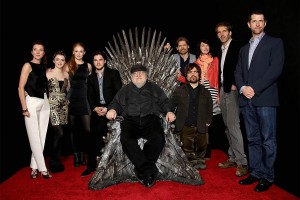 George R. R. Martin himself, along with some of the cast and the show’s creators – David Benioff and D. B. Weiss. (Image via Google)

The cast and characters have become household names and have permeated into mainstream Hollywood with poster stars Kit Harrington, Emilia Clarke and Peter Dinklage featuring in several high profile movies and franchises since the show debuted. Game of Thrones is also arguably the biggest pop culture attraction of this decade (‘Gangnam Style’ excluded) and as its audience grows, so does its budget, merchandising and revenue with season 3 becoming the highest selling DVD of the decade in the UK, prior to the debut of season 4.

Along with its incredible success with audiences, the show has also been a hit with critics and awards ceremonies alike. Season 5 won a record-setting 12 Emmy awards on one night in 2015. In total, the show has been nominated for over 500 awards and has won over 25% of them.

Numerous stars have clamored for coveted cameo roles with the likes of Coldplay and Mastodon featuring in blink-and-you’ll-miss-them roles. Sigur Ros have also appeared in the show to perform a version of the infamous ‘The Rains of Castamere‘ on screen themselves. The National also provided a much loved and revered version of the song, which featured in the closing credits of ‘Blackwater’ in season 2. Lily Allen, sister to Theon Greyjoy himself Alfie Allen, was offered a cameo role and Ed Sheeran has too sought an appearance.

Game of Thrones has had an impact unlike anything we’ve ever seen before, and we probably won’t see anything like it again….Valar Dohaeris.