15 years ago today, the acclaimed romantic comedy, Bridget Jones’s Diary was released in the UK on 13th April 2001.

“It all began on New Years’ Day on my 32nd year of being single,” we hear a begrudging Bridget Jones (Renée Zellweger) say upon the film’s opening – and you wouldn’t be wrong in making the subsequent assumption that this film is just a tad unoriginal. Based on Helen Fielding’s book of the same name (which was actually a reinterpretation of Jane Austen’s Pride and Prejudice), Bridget Jones’s Diary follows the ups and downs of Bridget’s love life as she navigates her way through the depths of sleeping with her boss, being cheated on, and the ever-present pressure from family, friends and strangers to get married and settle down quickly before it’s too late. And of course, the love triangle. There’s always a love-triangle. 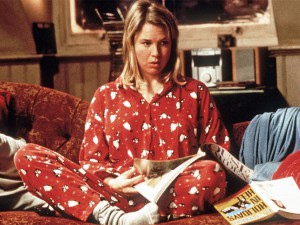 We can all relate to Bridget Jones and that’s why we love her. (Image via Universal Pictures)

Yet somehow, the plot’s unoriginality doesn’t seem to be a point of major, or any, interest. What does matter, and what is remembered about it, is its hugely relatable humour and wit. The film simultaneously combines the internal with the external; we laugh at Bridget but, at the same time, we are laughing with her. And that is because Bridget is every woman ever. She is a woman we all are, or have been, or at some point will be; and that’s brilliant because, let’s be honest, who wouldn’t want to be at least a little like her? It’s not surprising that Renée Zellweger was Oscar-nominated for her performance, which won everyone over despite the actress’ American heritage.

Comically middle class, as any film boasting both Hugh Grant and Colin Firth could ever be expected to be, Bridget Jones’s Diary pioneered in contemporary rom-com territory – a genre that is often difficult to succesfully break into, holding only a handful of memorably beloved films like When Harry Met Sally, Love Actually, or perhaps even Sex in the City 2 (yikes!)

For me at least (a typical non-fan of rom-coms), it’s impossible to come from the other side of this film without one of those big cheesy grins plastered on my face. And I’m not the only fan of those good old fashioned gooey eyes; the film received a positive reception from both fans and critics upon release and a sequel, Bridget Jones: The Edge of Reason, was released in 2004. The two films garnered a whopping £544 million at the box office, and we still haven’t had quite enough of Bridget yet, as a third film, Bridget Jones’s Baby, is set to be released later this year.

Have a look at the original trailer for Bridget Jones’s Diary below.