Following previous announcements regarding this year’s headliners, Glastonbury have now revealed the first line-up of artists who will be gracing Worthy Farm with their musical talent. 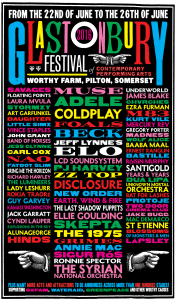 The full line-up so far.

While the likes of Coldplay, Muse and Adele will be stealing the limelight of the Pyramid Stage, other acts such as ZZ Top and New Order will also be playing at the festival.

Jeff Lynne’s ELO will occupy this year’s ‘legends’ spot, which in previous years has seen epic performances by icons such as Lionel Richie and Dolly Parton. More acts and attractions will be announced in the coming weeks/months.

Glastonbury is set to take place from 22nd-26th June. For more details, visit their website.